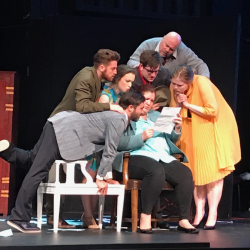 Due to unforeseen conflicts this program is
POSTPONED until SUMMER 2023

MARK ROSS CLARK, Stage Director, Alexander Technique Teacher, and Author of Singing, Acting, and Movement in Opera, Guide to the Aria Repertoire and The Broadway Song


Apprentices will be guaranteed a role in Orpheus, a Mozart scene, and a solo piece on one or multiple regional concerts.

Auditions and Assignments
Please apply directly through our audition service at GetAcceptd.com. Young artists are requested to upload the following:


*Application Deadline: June 1, 2022
Audition results will be posted, and acceptance letters will be sent no later than May 10. Please note: we are accepting applications on a rolling basis so please submit your applications as soon as possible.

Elizabeth Futral, soprano
is one of the world’s leading sopranos, embracing a repertoire that ranges from Baroque to world premieres, including the leading role of Stella in Andre Previn’s A Streetcar Named Desire. She has notable relationships with the Washington, Houston, Santa Fe, Los Angeles, New York City, Vancouver, and Minnesota opera companies. Internationally, she has been heard at the Royal Opera Covent Garden, the Bayerische Staatsoper, Deutsche Oper Berlin, the Theater an der Wien, the Grand Theatre de Genève, the Gran Teatre del Liceu, and Hamburg Staatsoper. She also has been featured as a soloist with the great symphony orchestras of the world. She currently teaches at Peabody Institute.

Allan Glassman, tenor
a leading tenor at the Metropolitan Opera, Spoleto Festival,  The Santa Fe Opera, the LA Opera, Chicago Lyric Opera, Frankfurt and Paris Opera, and throughout the world.  He is on the faculty of Roosevelt University in Chicago.

Richard Zeller, baritone
a leading baritone at the Metropolitan Opera, is an internationally acclaimed singing artist.  Not only has he performed with many of the leading opera houses, he also is known for his success in the concert hall singing the central role of Elijah with the Chicago Symphony and the Cleveland Orchestra, and has soloed with many other symphonies.

Ari Pelto is a young conductor who at age 24 was made assistant conductor at the Spoleto Festival.  Since then, his mercurial career has led him to conducting at the New York City Opera and around the world.  He has worked with many young artist companies and conservatories, including  The Juilliard School, The Curtis Institute, Manhattan School of Music and Oberlin Conservatory and the Young Artist Programme at Covent Garden. He is presently the Music Director of Opera Colorado in Denver.

Dr. Mark Ross Clark began his career as a solo singer with the Roger Wagner Chorale, then concertizing in Germany, Austria, and France before singing at the Giessen Stadttheater for three years. Returning to the US, he began to study to become a director, starting a doctoral program at the University of Washington and apprenticing for mentors Wesley Balk and Giorgio Tozzi.  Following the artistic direction of several regional opera companies, he was for ten years a professor teaching opera workshop and stage director at The Indiana University Opera Theater. He is a certified Alexander Technique teacher.

For technical questions, please check out our Help Desk for frequently asked questions.