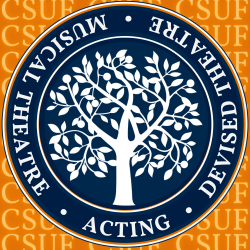 
Why CSUF?
There are many fantastic reasons, but here are a few highlights...

Location: 26 miles outside of Los Angeles. Commutable to countless professional theatres and the mecca of the film/television industry. Average temperature of 70 degrees in the winter (85 degrees in the summer). 15 minutes from Disneyland. 30 mins from the beach. 2 hours from the desert, the mountains, or the Mexico border. Southern California has it all!

Campus: Fullerton is the largest CSU campus with over 42,000 students. Robust and nationally recognized sports teams, if you're into that, with an adorable elephant mascot, Tuffy the Titan! State-of-the-art fitness center, student union, and recreation center. 26-acre Fullerton Arboretum, our very own nature's oasis!

Alumni: CSUF Theatre alumni have gone on to all varieties of jobs within the entertainment industry ranging from Broadway and film/TV actors, casting directors, film editors, theatre/film/tv technicians, professional directors, educators, and so much more. At CSUF, we foster and celebrate all of these diverse career paths.