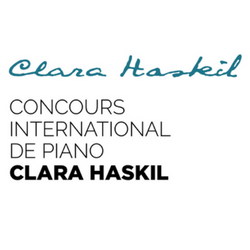 The Competition’s purpose is to discover young talent capable of representing the Competition’s values: musicality, sensitivity, humility, constant re-evaluation, ceaseless striving for excellence, attention to chamber music partners, and respect for the composer's musical text. These values are inspired by the life and career of Clara Haskil, a Swiss pianist born in Bucharest, Romania in 1895 and who died in Brussels in 1960.The programme reflects Clara Haskil’s vast repertoire through a recital, a chamber music performance, and a concerto with orchestra.
The first editions were held in Lucerne; since 1973 they have been held in Vevey, where Clara Haskil lived from 1942 until her death. A street in Vevey bears her name.

CONDITIONS FOR ENTRY
1. The Competition is open to pianists of any nationality born after 31 December 1995.
2. Application online only at: clarahaskil.getacceptd.com
3. Application deadline: Wednesday 5 April 2023.
4. Pianists who qualify for the public quarter-finals will receive a confirmation of participation and the score. for the compulsory piece on 28 April 2023 at the latest.
5. The application fee is $75 and is non-refundable.

The jury for the first round will be composed of the President and two members of the Jury. They will meet in private in April 2023.

Engagements
The Competition will strive to establish partnerships with various concert organisers and orchestras in Switzerland and abroad in order to propose concerts to the winner of the Clara Haskil Prize. The Competition is furthermore prepared to help the winner to find a concert agency with which he or she can collaborate.

Public Prize
During the finals of the competition the public will have the opportunity to vote for the winner of the Public Prize. The prize will be shared in the event of a tie. The prize amounts to CHF 3’000–.

Modern Times Prize
Created in 2013, this prize is awarded for the best interpretation of a work specially commissioned for the competition. It amounts to CHF 3’000–, and will be awarded by the jury to the best performance during the finals of the work commissioned to Swiss composer Heinz Holliger (short piece lasting about five minutes).

Coup de Cœur Prize
A panel of students, known as La Jeune Critique, has been put together as part of an academic project with the Musicology department of the Geneva University of Music. One of its tasks is to award the “Coup de cœur” prize, amounting to CHF 3’000–.

Children’s Corner Prize
As part of a collaboration with the Vevey Conservatoire, a jury of young children studying piano will award their “Children’s Corner” Prize during the Finals, for an amount of CHF 2’000–.


TRAVELLING EXPENSES
The pianists are responsible for their own travelling expenses. These are, however, refunded on production of receipts, up to a value of CHF 1’000–, to pianists who reach the semi-finals.