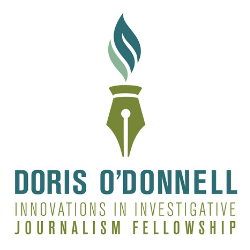 The Center for Media Innovation at Point Park University is relaunching the second year of its $20,000 Doris O’Donnell Innovations in Investigative Journalism Fellowship after pushing pause in 2020 during the early part of the COVID-19 pandemic.

“The pandemic has highlighted two conflicting truths about local journalism – the public wants and needs access to original reporting, and the newsrooms that generate that content are more fragile than ever,” said Andrew Conte, director of the Center for Media Innovation. “The O’Donnell fellowship addresses these needs by helping local newsrooms tell enterprising stories in areas of the United States that remain largely uncovered.”

THE APPLICATION DEADLINE HAS PASSED. The winner will be announced April 14, 2021.

With the goal of making an even bigger impact, the fellowship this year also will award second- and third-place prizes of $5,000 and $2,500. The fellowship is made possible through a three-year grant from the Allegheny Foundation.

The fellowship winner will have eight months to report and publish or broadcast stories. The honoree will be required to come to Point Park University’s Downtown Pittsburgh campus to meet with students and attend a celebration of their work. If the ongoing pandemic does not allow an in-person visit, other arrangements will be made.

A panel of seven distinguished judges with credentials in innovative and investigative journalism will evaluate applicants based on value, innovation, engagement, diversity and ability. That panel includes:

“Right now, journalists have little spare time or energy to think about anything beyond their work and the daily challenges they’re facing,” Conte said. “We have made the application process as painless as possible, and it’s our hope that these additional two weeks will make it even easier for journalists who need support.”

THE APPLICATION DEADLINE HAS PASSED. The winner will be announced April 14, 2021.